I Love My Period!

I love my period! Said no girl ever. With the cramps, the bloating, cravings, tampons, pads, mood swings the list goes on. Who would love it? The only thing that it really seems good for is that it’s basically a free pregnancy test. But other than that it’s nothing more than an inconvenience. However, in a recent blog titled, “ Sisterhood, Blood and Boobs at the London Marathon 2015,” written by Kiran Ghandi, former drummer to musical artist M.I.A., expresses her thoughts and experience on running the entire London Marathon on her period without a pad or tampon. Kiran trained for a year in order to participate in the London Marathon. But the night before the race she unexpectedly got her period. Kiran said, “ I got my flow the night before and it was a total disaster but I didn’t want to clean it up. It would have been way to uncomfortable to worry about a tampon for 26.2 miles”. Although she was unhappy to receive her period the night before the race she was able to take what was at first a disadvantage and use it to make a strong statement on the reality of being a woman. 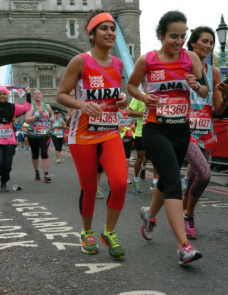 Kiran decides to the run the entire race without a tampon allowing her blood to show through her spandex for everyone to see. She inspiringly did this to stand up for the women who do not have access to feminine products and for the women who do experience cramping and pain during their period but are still able to be strong enough to pretend like it does not exist.

With all the controversies and negativities constantly being publicized to society from the tragedies in the Middle East, the bashing in the upcoming presidential elections, and to Miley Cyrus just being to provocative it’s good to be able to read about someone trying to make a change. Kiran did not decide to bleed through her spandex in public to gain publicity. She did it to empower women and to allow them to have acceptance and pride in everything that they are— including their period. Unlike Kim Kardashian, Kiran used the advantage of being a public figure to allow women to be able to relate to her. She is illuminating that she is not afraid to show the world who she really is and how proud she is to be a woman.